Español English
You are here: Home / News / Ronal’s new plant in Platea will mean over one hundred new hires 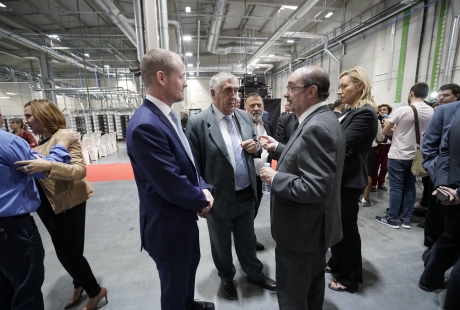 The President of Aragon participated in the opening in Teruel of the automotive wheel company’s new facilities, to increase its production to nearly 3 million units
The Swiss company, installed on the La Paz Industrial Estate for over 30 years, boosts occupation of the Teruel Logistics Platform with this expansion and highlights its strategic location and specialisation in a leading economic sector

The President of the Government of Aragon, Javier Lambán, took part today in the opening of the plant Swiss aluminium car wheel maker, Ronal Ibérica, has built on the Teruel Logistics Platform (Platea) to expand on the production from its factory on the La Paz Industrial Estate, where it installed itself over 30 years ago.

The new facilities in Platea will allow it to increase production from the current 2.2 million wheels to 2.8 million per year. The investment made, which finally exceeded €100 million in total according to the company, will make it possible to consolidate over 500 existing jobs and to create over one hundred new jobs in successive development phases, representing an increase in the workforce of 20% according to its managers.

The President of Aragon, Javier Lambán, who assured that Ronal’s establishment in Platea is a “definitive recognition” for the economy of Teruel, underlined the capacity of the company – which is strategic for the province – to generate quality employment. In his judgement, this sector of the industry “has added value” from the point of view of jobs and of investment in research and innovation.

Lambán highlighted the speed with which Ronal built the current plant, as well as the investment made and its commitment to incorporating R&D&i and has offered all possible collaboration from the various departments of the autonomous region’s executive to create more high-quality jobs. As such, in addition to support from the Aragon Government Ministry of Economy, Industry and Employment, the Department of Education will also drive Dual Training Programmes with Ronal. All these public-private collaboration measures “will enable competition with the most advanced economies”.

The new Ronal Ibérica plant in Teruel is located on a plot of 240,000 m2 on the Platea estate, with a built area of 101,000 m2. The project consists of six buildings (the largest of them the production building with a built area of 47,848 m2), making a great leap in quality towards Industry 4.0, with the most innovative systems in robotics, automation and IT. The increase in current production from the La Paz Industrial Estate plant at 800,000 additional wheels per year (13,000 daily) leaving the new Platea facilities will lead to the hiring of over one hundred new employees in successive development phases, with all that entails as regards settlement of population and opportunities for the region.

The event has brought together numerous local, autonomous region and national authorities. In addition to the President of Aragon, accompanied by the region’s Ministers of Economy and Education, Marta Gastón and Mayte Pérez, involved in or attending the opening were, among others, the Swiss Ambassador to Spain and Andorra, Giulio Haas, the Secretary of State for Employment, Juan Pablo Riesgo, the President of the Provincial Office, Ramón Millán, and the Mayor of Teruel, Enma Buj, as well as the province’s main social actors.

Leading the hosts was the Chairman of the Swiss multinational, Yvo Schnarrenberger, together with the managing director in Teruel, Dominik Wiederhold, other members of the Board of Directors and the managers of Ronal’s other plants in Germany, Poland, the Czech Republic, Italy and Mexico, as well as a significant representation from construction company Heberger.

Lambán – accompanied by the Ministers of Economy, Industry and Employment, Marta Gastón, and of Education, Culture and Sport, Mayte Pérez – emphasised the importance of the company not only to Teruel, but also to the whole Region. The new Ronal Ibérica plant gives a new boost to occupation of Platea, which has now passed 42% with over 600,000 m2 sold and twenty companies with a total of 200 workers on site.

The Teruel Platform, close to Valencia, Sagunto and Castellón and connected by the A-23 highway, by railway and by Caudé airport, is in a strategic location close to many of the country’s main car plants, representing an added value for this industrial sector, both for plants such as Ronal’s and for other auxiliary industries.

The nature of an economic engine of this project and the subsequent creation of wealth and employment, with added social and territorial impacts in Teruel, meant that the Ronal expansion was at the time declared to be of interest at autonomous region level and regional incentives were processed from Aragon, complemented by the Aragon Development Institute (IAF), in the framework of the Teruel Investment Fund (FITE) with 3.3 million in aid, in addition to the modification of the development project for the logistics/industrial platform managed by Platea to provide high-pressure gas and to supply electricity at medium voltage, also with public aid, to the Ronal plant.

The President of Aragon previously participated in March last year in the laying of the foundation stone for the new Ronal plant opened today in Platea and, among other things, highlighted the aim of improving Teruel’s railway communications, working to improve the connection between the Atlantic and Mediterranean corridors, a commitment which has been reinforced since, with the ultimate aim of making Aragon the logistics hub operating on the 70% of Gross Domestic Product (GDP) generated in the country’s north-east quadrant.

The Ronal Group, with its head office in Härkingen (Switzerland), is a European leader and one of the leading manufacturers of light alloy wheels for cars and commercial vehicles worldwide. It has twelve production plants spread over three continents, where it produces over 21 million wheels per year. Since its founding in 1969, the company has seen constant growth and now employs over 7,500 workers worldwide. And Teruel is one of its centres of expansion.